Student of the Month (January) for Bikram Yoga Langley: Pam B. 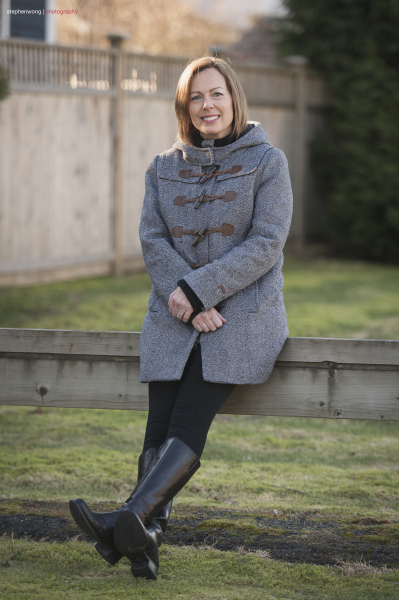 When Pam tells you that she has been married for nine years, has two kids, a dog and two cats, you wonder whether there is room in her life for her or time in her life for yoga.

“My yoga practice is as important as vacuuming or grocery shopping. I have to be as important as everyone and everything else. I can’t put myself at the bottom of my to-do list,” she explains. In order to avoid putting herself at the bottom of her list and to make time for yoga Pam simply schedules it in. “I realized that in order to have time to do yoga, I had to make it happen. I created a schedule that would ensure that I get everything done, and I get some time for myself.”

On days when she’s not working as a flight director for Air Transat, Pam packs her days. “When I’m home
I take the kids to school, come home, get the dog walked, then I clean up the kitchen, do my housework until 11:00. I take a tea break and get organized for 12:00 yoga class. After class, I pick up what I need for dinner, and get the kids from school.” Sound like a lot? Pam shrugs, “It’s busy, but doable!”

Anyone this dedicated to Bikram Yoga must have loved it from the first minute, right? Pam describes her first class, over four years ago, as “pure Hell,” and it only gets worse (and funnier) from there. “I managed about 10 minutes before I began to panic! I spent the rest of the class thinking that I was having a heart attack, or that my head was about to explode or that I was going to faint from the heat.

At one point I was lying down and heard an ambulance going by. I was hoping that someone realized that I was in terrible shape and called the ambulance for me.”

Having made it through the full 90 minutes, Pam felt everything – including amazing! “After leaving the class and feeling the rush of cold air on my skin, I realized that I had made it. I could barely walk
down the stairs to my car,as my legs were shaking so badly. I went to pick my son up from preschool
and his teacher had a look of horror on her face when she saw me: I was bright red in the face, covered in sweat and looking like I was going to throw up. I told her I had been at Bikram Yoga, to which she said, ‘I bet you won’t be doing that again’. I replied, ‘I can’t wait to go back!’”

Pam lists improved cardio, increased back and shoulder strength, and a stronger core as some of the changes she’s seen in her fitness since beginning her Bikram yoga practice. 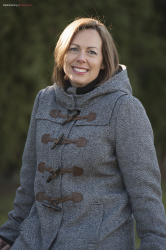 Without knowing anything about Bikram yoga or what to expect, Pam began, almost on a whim, because she was feeling very unhealthy. “I had recently quit smoking and felt like I needed to find a way to clean myself out. There was a 2 week trial offer and thought it was worth trying.” She’s excited she can do Camel now. Although, she notes that progress is sometimes slow and not always consistent: “It took 3 years of practice before I could do it and I still have days where I can’t do it.” However, challenging herself to meet her goals is one of the things Pam enjoys most about her Bikram yoga practice: “I enjoy seeing the incremental changes in the postures. After 4 years I still am learning new things and getting a bit stronger all the time.”

Pam has also made commendable progress in the non-physical aspects of her yoga practice as well: “It’s really important for me not to compare myself to other people. It’s something I continue to struggle with
but am learning to be kinder to myself. I have learned to be patient with and kinder to myself.”

Student of the Month (January) for Bikram Yoga Langley: Pam B.