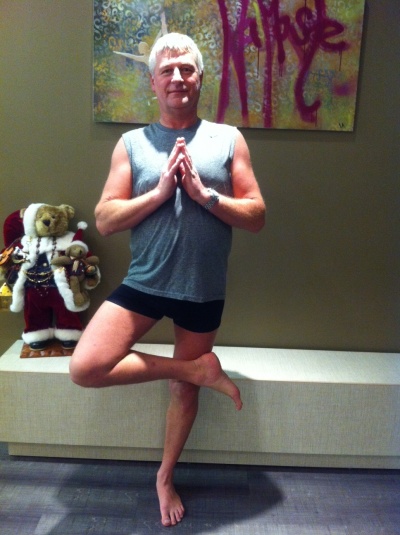 If you’d have told Steve three years ago that he’d soon be doing yoga 4 times per week, his response would have been, “Nah, not likely!” Steve is one of the many men at our studio who was introduced to Bikram yoga by his wife, although she wasn’t pushy about it. “Esther, my wife, recommended that
maybe I try it.”
Steve never has a bad thing to say about Bikram yoga, even considering his first class, “I was sweating bullets but didn’t run out of the room.” He adds, “It made me realize how stiff and out of shape I was.”
July 4, 2012 was Steve’s first class. “It was an eye opener,” he says, “It was way more difficult that I thought it was going to be.”
As far as Steve is concerned, the difficulty was a plus: “Because I’m so focused, I took it up as a challenge to apply myself more to it.” When you have four kids and own your own decking supply business, as Steve does, you have to be driven and organized.
Between watching and helping out with hockey and soccer activities for his two sons, as well as spending time with his wife and two daughters or rehearsing with one of his two musical groups, Steve doesn’t have a lot of time, “I ditch work at 4:00 to make sure that I have plenty of time for my pre-class savasana,” he
laughs. “I shoot for 4 classes per week. Mostly, I do the 4:45 classes during the week and Saturday or Sunday 8:00 or 8:30 am classes.” Steve simply picks a class and makes it work: “It’s because of my schedule – I have to get the kids to their games and help or watch. Or, I have singing, like tonight.”
Steve makes the time because he knows how beneficial a regular Bikram practice is. He’s noticed the impact in his overall flexibility, especially in the back. “My back is a lot more limber.” He adds, “It’s really helped with releasing the stress. I used to get headaches from tension carried in my neck. The yoga
has really helped with that.”
And there are the changes other people have noticed. “The breathing has helped in regards to singing. I’m singer in a vocal group and the singer in a rock band.” His wife has noticed his weight loss and toning. “I’ve lost weight big-time,” Steve explains, “15 pounds. Esther likes that a lot of the weight loss has been around the middle, and I am more defined in the torso.” While Steve notes that he doesn’t have time for much else exercise-wise, it sounds like he’d rather be doing Bikram yoga anyway: “I used to have a real regime for working out 10-15 years ago; this is more rewarding than weight lifting in the gym.” Now, at 52 years old, Steve proudly proclaims, “My weight now is what it was when I was 25 years old.” 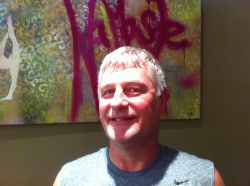 Steve plans to continue to make progress in his health and yoga practice. “The hardest posture is toe stand – I’d love to be able to hold it for 3-4 seconds. I’d love to be able to do that.” He thinks for a moment, “It’s happened once, actually.” Steve enjoys the marriage of physical and mental discipline in the Bikram yoga practice and is continually challenging himself to “take the poses to the next level”. He plans to continue to challenge himself by doing the intermediate 40+ class and build upon some successes he’s already noticed in some postures. He is clearly excited giving an example of a difficult posture he is now achieving, Standing Bow – I’m really quite surprised about that one. I can actually hold the pose, and I can actually see my foot in the mirror.”
Aside from the personal benefits of physical and mental conditioning, Steve also enjoys the social aspect of his practice at Bikram Yoga Maple Ridge. “I’ve met a whole bunch of really nice people and made some new
friends. It’s nice that everyone thinks the same way about their health.”