Emily and Grace are two tiny yogins who have been coming to kids’ yoga classes at Bikram Yoga Langley for over a year now. I talked to Emily after class one day. When I asked her how long she had been doing yoga, she said a long time “one hour.” The kids’ class the sisters had just finished is one hour long, which is quite a long time for kids aged 4 – 8.

When asked what her favourite posture is, Emily, the more outgoing of the two sisters, replies, “All the parts” with enthusiasm that backs up her bold statement.
Emily doesn’t mince words. When asked if she likes coming to yoga with her sister, rather than having to go to class by herself she stretches out her “ummm” before answering, “Yeah”.  Then quickly clarifying, “actually, no.”
Despite this, there is no sibling rivalry between Emily and Grace during class. Both are focused and bendy – easily touching their feet to their heads in half locust.  They said that there are no postures they think are hard; they are all pretty easy for them. Oh, to be young again!
Both Grace and Emily said bunny pose (rabbit for adult yogis) is their favourite Bikram posture.

They told me that their mom won’t be doing yoga with them, but they will do the adult class when they get older. For now they are happy to keep doing kids yoga with their favourite teacher, Juliette.Bikram Yoga Langley offers kids yoga on Saturdays, while kids’ yoga class es at Yoga 360 Surrey are on Sundays. 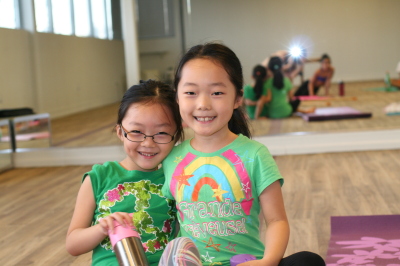 stay in the know