Now celebrating her one-year Bikram yoga anniversary, this self-professed cardio junkie found peace of mind through her 4-5 class per week Bikram yoga practice. As the director of a non-profit organization and the mother of two teenagers, Vicki has no shortage of stress in her life.

Encouraged by her friends John & Angela, Vicki attended her first Bikram yoga class in December 2013. Vicki had never expected to do and love Bikram yoga, in part due to some negative-sounding stereotypes: “I had heard about the extreme heat and the militant approach to class structure.” However, her friends, John and Angela, had praised both the Maple Ridge studio and the fitness benefits of Bikram yoga, and Vicki in the door. “I started in December 2013 attending the Monday 4:45 class with Mary Lim-Hing. Looking back now, I am very grateful that Mary provided such a nurturing yet structured introduction to Bikram. Instinctively, she knew how far to push me, with a lovely emphasis on encouragement that drew me into the Bikram community.”
“The Bikram environment is very inclusive,” Vicki explains, “Part of what makes me feel comfortable is that we’re all there from different backgrounds, ages, shapes and sizes, yet all challenging ourselves through the same pattern of movements.” Vicki gives “the shockingly skimpy, yet functional yoga clothes that I never thought I would wear” as an example of a studio culture that encourages self-acceptance.

This attitude of acceptance rather than perfection permeates Vicki’s expectations of her performance in the yoga room: “I’m drawn to the personal challenge of small improvements with each pose. I love to celebrate my incremental accomplishments, and (usually) leave class a whole lot more peaceful and fulfilled than when I entered the studio.”

If you wonder what motivates Vicki to do her 4-5 classes per week, including the occasional Thursday night double, she sums it up as “a bit addictive really”. Setting and achieving goals is also important for maintaining motivation. Vicki notes a recent breakthrough and a posture goal that she is currently working toward: “I never thought I would see my foot over my head in Bow” (now she can), while “slowly but surely the darned knee is coming down to my other knee in Tree.” Some of Vicki’s other Bikram yoga accomplishments include greater self-confidence, calmness and increased flexibility Fitness has always been a part of Vicki’s life, and Bikram has become a big part of that. “I enjoy the meditative routine combined with the fitness challenge of Bikram,” Vicki says. “Core training, balance and reflective meditation were great compliments to my fitness routine.” 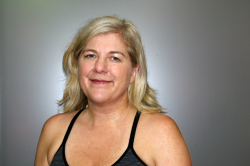 Maintaining physical health and a work life balance, allow Vicki and her husband to pursue their many hobbies, among them, boating: “We love spending time with friends and the kids on our 24-foot boat, exploring the Gulf Islands or wakeboarding at Pitt Lake.” She realizes that being able to take part in physical activities without hesitation is an incredible gift to give to herself and family. Making the time for exercise doesn’t just benefit Vicki: “I guess it comes down to priorities, and the knowledge that when I feel better about myself and my fitness goals, I really am a happier person, a better mom and a better wife.”  While the purpose of profiling a student each month is to encourage and inspire others to Bikram yoga and to challenge themselves in big, small and meaningful ways, Vicki acknowledges how her Bikram community of students and teachers has inspired her. “They really make the Maple Ridge studio a welcoming and positive place to practice. A few laughs, the occasional ‘wind removing’ and, of course, a great deal of sweat make a Bikram work-out beneficial in more ways than can be measured.”